Thanks to the historical train rides of the Horehron Express, many people have had the chance to discover Telgárt and some of the most distinguished viaducts Slovakia has to offer. Although the season’s finished, it does not mean the end of the trips. Autumn weekends in Horehronie offer magical and more peaceful atmosphere. Here are tips for an autumn trip to see viaducts, do some hiking and finish off with wellness. As many restaurants are taking breaks and closing down for the season, we’ll give you an advice where to stop for refreshments.

Besides the fact that Chmarošský viaduct is a hot Insta spot, it is also one of the most important railway constructions. Many passerby and visitors make a mistake of taking a quick shot and leaving this place quickly behind. However, it is an experience on its own to actually discover this place from closer, know its story, take a walk and enjoy the surroundings of the Tatras, the Slovak Paradise, or do the whole train ride of the Horehron Express all the way to Telgárt.

Nominated for the construction of the century

During the interwar period, there was an effort to connect eastern regions of Slovakia with the rest of the republic and using the train connection was at that time most effective. Bridges and tunnels were required for the variety of the terrain and its multiple elevations were common for this region. The most beautiful section of the track is from Červená skala to Dedinky, specifically its part under Kráľova hoľa, which posed a great challenge for engineers. They decided to solve it with a spiral tunnel.

This spiral is called Telgártska sľučka (loop) and overcomes an elevation of 31 meters ascending to the Besník saddle. The spiral is a 1.3 km long tunnel shaped into a loop that also consists of two viaducts: Chmarošský and Telgártsky. Although Telgártsky is the highest it is not possible to see it from the road and so he escaped the attention of social networks. The entire railway line from Margecany to Červena skala was nominated for the construction of the century at last year’s celebrations of the 100th anniversary of Czechoslovakia.

The most enchanting section of the railway line is found where the loop is located; from Telgárt to Dobšinská Ice Cave, which is only one stop away. Two trains operate daily in both directions all year round (one in the morning and one later in the afternoon).

Outside the summer season, an express train to Brezno departs from Telgárt at 7.30 during the week and 9.45 over the weekend. I would recommend that you arrive at the Telgárt – penzión station earlier and take a walk to the Telgárt Viaduct, which is little known, and tourists often miss it.

The best way to see Chmarošský viaduct is if you take a train from Brezno and take a window seat on the right side of the train. Due to the curvy railway it is almost impossible to properly see it when coming from the other direction.

Because the Telgart Viaduct is too straight, seeing it from the train is impossible. However, you will know you’re on it when you see the Telgárt Ski Resort from the window.

So, what’s the best way to do this trip?

Drive to the Telgart ski resort where you can park your car and just across the road there is a train station Telgárt – pension. From here you can get on a train for 1 stop to the Dobšinská Ice Cave. This way, you will pass through the most enchanting section of the railway via tunnels, viaducts, with beautiful views of the Hron spring, Pusté Pole and Hnilecká jelšina. Unfortunately, the cave is closed from October until the middle of May.

To get back, you can actually walk as it is only 9.5 km away and takes around 2.5 hours. You will follow the green trail to the Besník saddle, where you can stop for a coffee in Ranč pod Ostrou skalou. From there you will follow the red trail and walk alongside the spring of river Hron, pass by Chmarošský viaduct and you are by your car.

In this link you will find the full route with the GPX file to download from mapy.hiking.sk

Hungry and in need of wellness?

I will go through the several options, which you have. You can have lunch either in Penzión u Hanky or in Horehronska kúria. At Hanka’s, you will be offered delicious homemade meals, however, you must call in advance to book the table. Horehronská kúria is usually open, and meals and pizza are prepared directly by the owner. Although the hut under the ski lift is closed during the autumn, you can drive Predna Hora (15 km away), where you can dine in the guest house, tasting special craft beer and relax in wellness. If you are not interested in wellness, I would recommend Pohostinstvo pod úbočou in Šumiac.

Comfortable accommodation in Telgárt can be found right opposite of the viaduct under the ski lift, in the Penzión u Hanky, or nearby villages of Šumiac or Predná hora.

The above-mentioned trip which combines seeing viaducts, light hiking and wellness is ideal for a relaxing weekend for couples, groups of friends or families with children. Don’t hesitate and come visit Horehronie!

If you have questions about the trip or accommodation, please send us a message via messenger or email stey@steyslovakia.com.

Have a pleasant autumn. Ivana 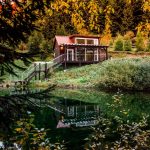 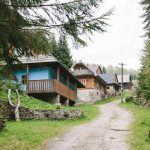 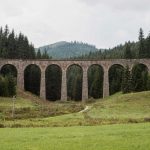 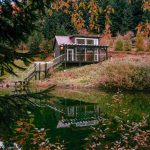